The 2022 Alabama Open presented by the City of Gadsden was one for the books as Bo Hayes of Birmingham secured his victory in a three-way playoff against Drew Mathers of Mobile and William Walker of Tuscaloosa. Players from across the Section arrived at Twin Bridges Golf Club in Gadsden, Alabama on Friday, July 22, 2022, ready to compete.

The first round began at 8:00 AM Friday morning, and Hayes found himself at the top of the leaderboard after firing an impressive 8-under-par 64. Just behind Hayes, Mathers and Walker tied for second place after the first round at 7-under-par 65.

Like the day before, the second round began at 8:00 AM Saturday morning, as the weather heated up throughout the day, so did the competition as players aimed to make the cut. At the end of the second round, two familiar names were tied at the top of the leaderboard. Mathers and Walker both shot 5-under-par 67. Forty-one players advanced to the third and final round of the Alabama Open.

Sunday morning rolled around, and the players were off. As the day went on, the clouds started getting darker, and thunder started rumbling in the distance. Most groups had already finished their final round when the horns blew and everyone returned to the clubhouse for a weather delay. After a few sprinkles, the last few groups went back out to finish their rounds.

As the final group of Hayes, Mathers, and Walker approached the 18th hole, it looked like we were poised for an exciting finish. Hayes birdied, Mathers bogeyed, and Walker parred the last hole to send all three to a playoff. In the end, it was Hayes who would come out on top.

The Low Amateur was Ross Napier of Hartselle who finished the tournament at 8-under-par 208 and tied for fifth overall.

The Alabama – NW Florida PGA would like to thank our host PGA Professional Chet Hallman and everyone at Twin Bridges G. C. for hosting this event. Additionally, thank you to our presenting sponsor, the City of Gadsden, and to our supporting sponsors Whitesky Communications, Yamaha Golf-Car Company, and Michael Noe Insurance Agency. 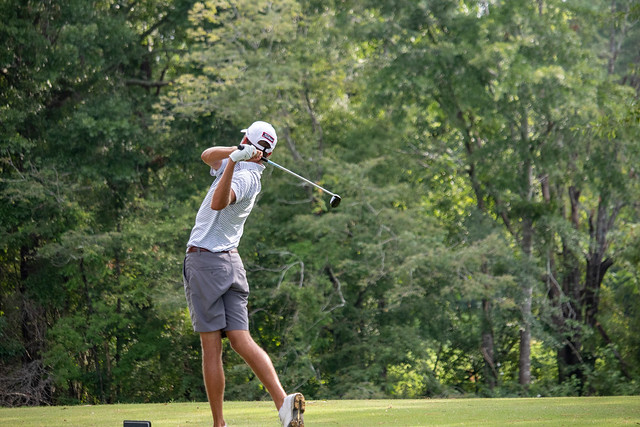